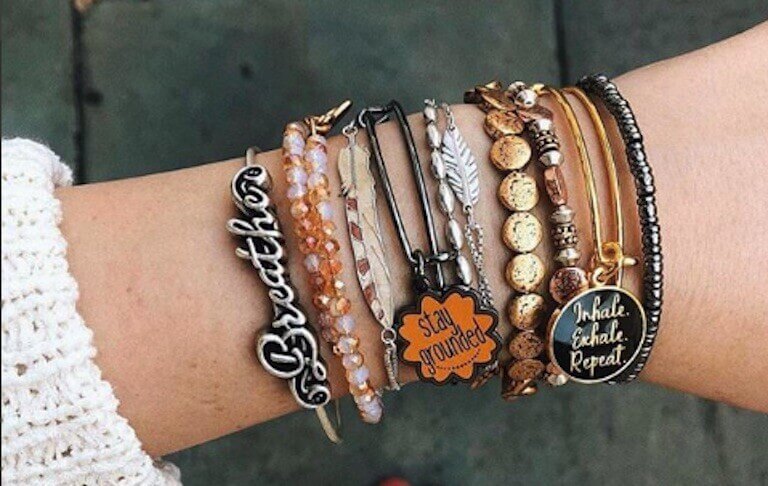 Nearly 40 years after starting the business, Ralph Rafaelian’s daughter, Carolyn, decided to take the family jewelry vocation a step further and turn their small business into a major brand name of her own.

Alex and Ani traces back to 1966 when Carolyn Rafaelian’s father began manufacturing jewelry with all made in America materials. Using this inherited expertise, ethics and resources, Rafaelian started a jewelry line of her own, naming the company after her two daughters.

While @Alex and Ani become official in 2004, the company began as slowly building side work for Rafaelian, who knew she was in an unglamorous line of fashion. But her intentions were never to move to New York City and compete with the latest trends. Her pieces have always been unique and spiritual, every bangle bracelet, necklace, earring and ring designed to “enlighten the mind, and empower the spirit.” The celestial chic brand is best known for their charm bangles costing anywhere from $28 to $78 and made in America from premium, sustainable, ecologically sourced, and often local recycled parts and scraps.

Rafaelian has made not only a name for her company but for herself as well. She is known for her spiritual business tactics, often consulting supernatural powers for guidance on business moves rather than numbers and charts. Much of the CEO turnover is attributed to her stubborn vision as a founder and hard-to-work-with celestial connections. At least if you’re a business-minded CEO, it could be hard to work with. This 50-year-old free spirit, who has been known to consult planetary charts during decision making, made a lot of unconventional but extremely successful business strides because of the stars. One of which was in 2016 when she spent 7 figures purchasing original copper from the Statue of Liberty used to make a special Liberty Copper Collection.

Rafaelian believes each piece exudes energy that can have a positive effect on its wearer; she has a priest and a shaman bless her inventory. That’s how Rafaelian went from a one-woman band working out of her father’s Rhode Island factory basement into America’s only jewelry billionaire. She holds the number 18 spot on the Forbes list of America’s Richest Self-Made Women by owning 80 percent of a company worth at least $1.2 billion.

The first retail Alex and Ani store opened in Newport, RI in 2009 and today many of the stores act as anchor stores for the surrounding businesses. Only a select handful of elite department stores are permitted to sell the bracelets, despite Alex and Ani’s affordable price. In 2010 Giovanni Feroce joined the company as CEO and drove the company’s expansion. The company’s revenue grew from $5 million in 2010 to $230 million in 2013 to over $500 million in 2016. In 2012, Alex and Ani opened its first European stores.

Through all the growth and fame, Rafaelian has kept every part of the business within a few miles of the company’s Cranston, RI headquarters. A recent economic impact study by the government of Rhode Island that shows the business has indirectly created 3,000 – 4,000 new jobs in the state, many in the small manufacturing companies that previously struggled.

The company’s signature design is their patented sliding mechanism that replaces the traditional clasp, making each bracelet entirely adjustable, one of about 30 patents the company now holds. For women eager to show off their allegiances and express themselves, licensing deals started in 2012 with Walt Disney, the National Football League, sororities and the U.S. military. Alex and Ani now does more sales per square foot than any other retailer in the United States except for Apple.