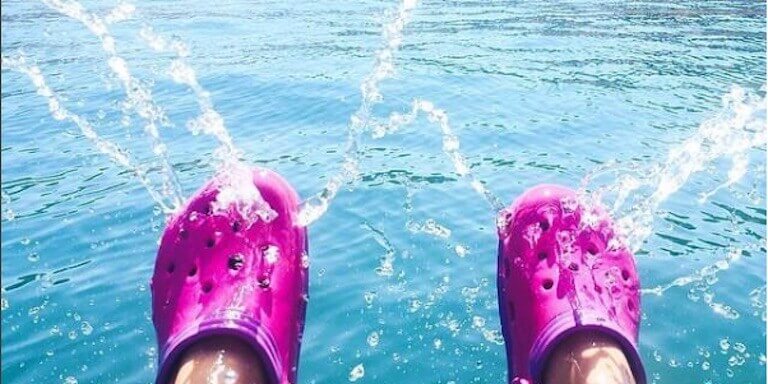 If a failing company asked you for marketing help, would you tell them to stay ugly? After a rollercoaster of sales that’s exactly what Crocs did, and it seems to be working.

The controversial @Crocs shoe dates back to 2002 when Scott Seamans, Lyndon “Duke” Hanson, and George Boedecker, Jr. banded together to create an affordable foam boating shoe, or as some critics would say, a plastic hoof. The product was first unveiled at a boat show in Florida where 200 pairs were sold, the first batch of over 300 million sold to date.

Since the unveiling, people have always said the same thing: those shoes are ugly. What keeps the orders coming, as is often the case, is the comfort. Crocs are made from Croslite, a lightweight, waterproof resin that resists bacteria and fungus. The shoes feature holes for breathability, and are springy and light despite their clunky look. The foam shoe forms itself to a wearer’s feet and is praised by podiatrists and those with foot problems. Many medical associations recommend Crocs for foot health, and in 2008, the U.S. government approved a model of CrocsRx with molded insoles as diabetic footwear.

Following the success of consumers embracing the eye-sore that Crocs are, the company expanded. Fast. Jibbitz that clip to the shoes’ ventilation holes as accessories debuted, often with themes like Disney or NASCAR. Then followed newer models like a Fuzz Collection for winter wear, flip flops, purses and other shoe designs. Crocs bought manufacturing facilities around the world, giving them the ability to meet a specific style in demand in just 2-4 weeks.

Sales spiked in 2006 at 200 million, then tripled in 2007. Then the recession hit, and this rapidly expanding company no longer had the demand to supply their production. Almost 100 stores out of 624 were shut down, with 300 jobs eliminated, many from corporate headquarters in Niwot near Boulder, Colorado. 2017 saw a bit of a comeback as the brand went back to focus on the proprietary Croc model, but 2018 still saw the closings of more manufacturing plants.

Tevas, Uggs and Birkenstocks are all enjoying a resurgence despite their aesthetic crimes. The issue with Crocs is that they were never branded as high end, always a casual outdoorsy fad. The parent company was never able to separate from that image with other styles of shoes, and enough disgust for the shoe was generated that ihatecrocs.com arose. After all, a shoe named Crocs because it looks like a crocodile from the side is just asking for hate from the fashion community.