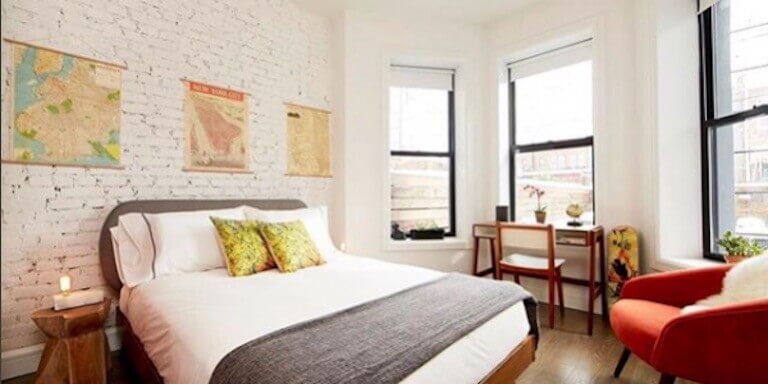 Some renters delight in the idea of apartment hunting, imagining the next phase of life and daydreaming about new decor, while others dread the thought of moving, finding a roommate and a safe neighborhood to live in. For Harley Courts, CEO of Nooklyn, his passion for apartment hunting included all aforementioned sentiments, fueling him to found his own room & roommate matching service.

Nooklyn is often compared to a dating service for roommates. Real estate agents work as a middleman to match those looking for housing with those who have housing but need a roommate. Apartments are filtered by price, neighborhood, subway lines, and other amenities. After verifying their identity on Facebook, interested roommates can meet, and the no-paperwork, pay-from-your-phone @Nooklyn service facilitates the agreement and ongoing transactions.

Before becoming a digital leasing platform, Nooklyn began as a blog in 2010 where Courts would keep apartment listings up to date, a challenge in an industry plagued by scams and outdated postings. Since fully launching in 2015, Nooklyn has helped 30k renters move, processed $52 million in rental payments, and has over 300 real estate agents working exclusively for the startup. 50k renters and owners in NYC use the Nooklyn platform every month.The company may be new, but it has been able to stand out from their competitors by offering local guides and a Nooklyn Stories initiative to connect people to the rich communities around them, making them more than just an apartment website and more of a community finder.

Courts hopes to expand his company to lower Manhattan by the end of the year, and to expand to other cities within 5 years, ideally becoming bigger than Craigslist. Nooklyn closed $825 million in seed funding in early 2018 from Patoma, a firm specializing in Brooklyn multi-family development and early stage tech investments, and several other real estate offices after getting by on bootstrapping for five years. They are now beginning a round of Series A funding. Nooklyn plans to use to the investment to enhance the website and app’s software, as well as expand its engineering, design, and data teams to build an end-to-end digital leasing product for renters, roommates and property owners. The company has expanded to several brick and mortar offices and continues to put safety first while opening up the platform so anyone can post to find a room, apartment, renter or roommate.

Courts prides himself on bringing the skateboard culture of community, family and art to the work environment at Nooklyn. He had previously started Substance Skateboards, which ultimately failed, partially due to the negative drug connotations in the name and partially due to the razor thin margins and all of the liability of upfront inventory costs. Courts lost 100k in the company and was evicted from his apartment along with other Substance Skateboards employees. He used his experience having trouble renting to create Nooklyn.

Nooklyn’s success reflects a bigger change in the NYC housing market. Sure, a service was needed for people who don’t make enough to live alone but don’t know anybody to live with. But it also touches on SRO, single room occupancy, a housing style that has ebbed and flowed in popularity with various economic and social factors such as The Great Depression and deinstitutionalization of mental illness. SRO housing became associated with poverty stricken communities due to their low cost and college dorm feel. However, most SROs have professional cleaning for the shared bathrooms and many come fully furnished. With New York’s large single population and high cost of living, SROs are now being renovated to attract the middle class making $40K-$120K. As the way people live transitions to marrying later and living on their own longer, NYC’s rent-by-the-room market model continues to grow.

Nooklyn won the Best Real Estate Website award at the 22nd annual Webby Awards in 2018, beating out the large corporations like Zillow, Trulia, and Realtor. At the time of the award, Nooklyn was a bootstrapped startup with a four-person engineering team.