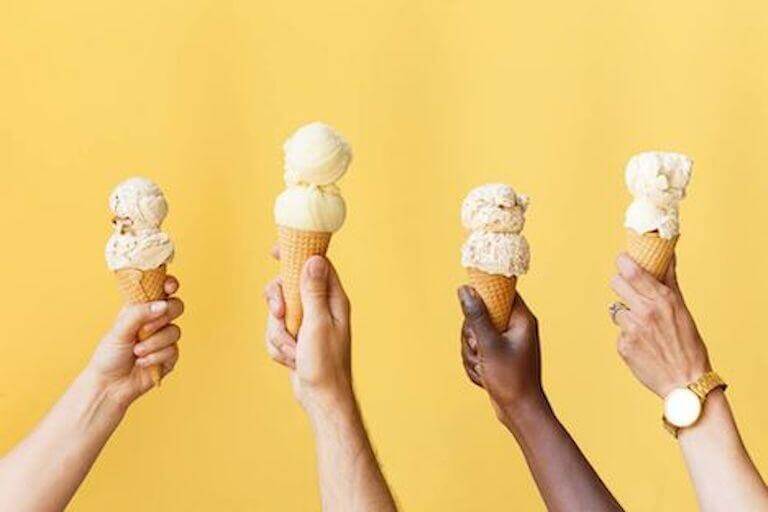 Jeni Britton Bauer was born dreaming of scream. Her journey to becoming an ice cream mogul was anything but straightforward, although looking back, it’s clear she was meant to found Jeni’s Ice Creams all along.

Jeni’s passion for flavor started with her first high school job at an ice cream parlour, then transferred to her next job at a French bakery. She was denied from Ohio State University, but got in after appealing to admissions on the grounds that her single mother was ill and it was up to her to care for her brother. A few years in, while playing with the idea of becoming a perfumer, Jeni thought about the experimental ice cream she was bringing to college parties and walked out of her sketch class right then and there to pursue her ice cream dreams.

In 1996, Scream Ice Cream stand in North Market Columbus Ohio was born, and lasted for 4 years as a labor of love while Jeni crashed on friends couches living off of the ~$683 a month she could take home. Part of the poor business model, she realized, was that only serving one, while incredibly made, flavor of ice cream could be incredibly limiting to customers. After she and her business partner closed shop, Jeni enrolled in Penn State’s ice cream making course to perfect her craft. She negotiated to buy a $30,000 gelato machine for $14,000 but had no funds to invest and it fell through.

Jeni then found herself working at a library and as a nanny, still saving up to start her business. Her babysitting clients knew of her dream and told her if she could put together a business plan they would invest in her the $35,000 she needed to open a shop. Jeni threw herself back into ice cream with the help of her boyfriend/now husband. He bought her an ice cream machine and word got out wonderful flavors of the week were being packed in chinese take out boxes and sold to a growing customer base.

The Wrights said no despite her success, explaining that they would own Jeni’s business, and Jeni should. After a stressful year of bank visits, Jeni and her husband were able to get approved for a $40,000 bank loan and the first Jeni’s opened in 2002, also at the North Market. As business took off, they reinvested profits into growth. When they needed a kitchen fit for wholesale production later on, they went back to the bank for $250,000 to fund their first full scoop shop.

The third shop opening is when Jeni saw the changes she was hoping for. The company was finally able to place large enough orders for wholesale farm products, such as entire fields of strawberries, specially grown chocolate and coffee and upwards of 350 gallons of raw milk purchased from local farmers.

The raw milk is key to keeping as many proteins as possible from the least amount of pasteurization. @ Jeni’s Splendid Ice Creams are smooth and creamy with a buttercream body, no synthetic flavors or dyes or complex stabilizers and emulsifiers. The brand is known for high-quality ingredients and creative flavors like Riesling Poached Pear Sorbet, Middlewest Whiskey and Pecans, Wildberry Lavender, Savannah Buttermint, Almond Milk Cortado, Askinosie Dark Milk Chocolate, Bangkok Peanut and so many more.

Jeni was always a visionary when it came to the artisanal ice cream movement. She has received two Sofi awards “Dessert or Dessert Topping” category for Lemon Frozen Yogurt and “Outstanding Product Line”, was a 2017 Henry Crown Fellow and has two cookbooks on ice cream making. She later received an honorary doctorate in business administration from the university after serving as the commencement speaker at the summer 2016 graduation. On an average day, Jeni is the mother of two kids, and the developer, designer, marketer, copyeditor and even photographer of her nationally recognized company.

The company hit a major bump in 2015 with a listeria scare when two pints and one spot of the kitchen tested positive for the bacteria. The company recalled 265 tons of ice cream. Jeni’s recovered and now has testing and control of their raw and fresh ingredients that goes above and beyond requirements.

Jeni’s now operates 33 scoop shops in 10 cities, distributes prepacked pints to over 3,000 high end grocery stores across the country, and ships anywhere in the US to bring in more than $30 million in annual revenue.