Invention Out of Necessity 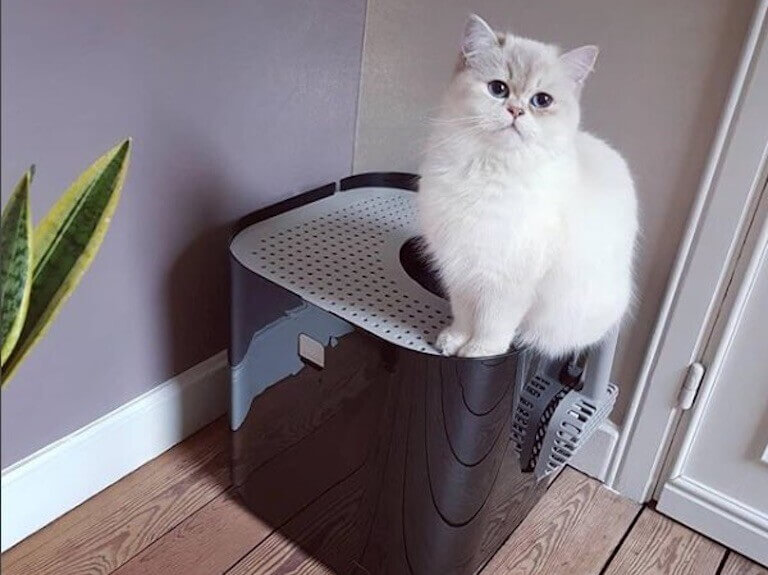 It’s a funny thing; when you put people in small spaces and force them to maximize the efficiency of every item in their tiny apartment, incredible inventions come out of it.

Rich Williams attributes his successful reinvention of the humble litter box to his two cats Mika and Sashi, his modern but small Brooklyn apartment, and his wife who responded to his complaints of being unable to find a litter box that wasn’t a total eye-sore with, “You’re a designer. Why don’t you just design one?”

Williams was working at a graphic design company as a partner with Brett Teper, who agreed that redesigning the litter box was the perfect business idea. After two years of sketching, building prototypes and cat testing, the first Modkat Litter Box with revolutionary top entry access made its first appearance at the 2009 International Contemporary Furniture Fair (ICFF) and earned The Editor’s Choice Award for Best Accessory, the first of many awards of to come.

The iPod of Litter Boxes

Hailed as “The iPod of litter boxes,” by the New York Times, ModKat is revolutionizing the way modern cats do their business. The box itself was styled to look like a modern piece of furniture, so well, in fact, that some users keep the box in spaces outside of the bathroom because no one can tell it’s a litter box. The Modkat box is a round-edged cube made from BPA free, bacteria resistant plastic and has a swivel grating lid that catches and removes litter from paws. There is a larger hole for rooftop entry, adding to the swanky composition. The high sides keep determined diggers from making a mess and even keep dogs out from trying to get the ‘treats’ inside. The box also comes with a scratch-resistant, reusable liner made from eco-friendly, easy-clean tarpaulin that helps both your wallet and the environment. Even the scoop was designed for maximum sifting efficiency!

Williams and Teper stress that their research before building prototypes was key. They found a top entry litter box already on the market that was $30-40 but looked like a rubbermaid garbage pail. They replicated the good features of reducing litter tracking and then compiled the negative comments to put into their new product, resulting in modernized and more functional box. Modkat retails from $35 to $140 depending on the style, but everything from the simple tray to the XL box offer state-of-the-art updates for the most fashionable of cats and decor savvy owners. The wonder box also reduces litter to about 70% to 95% of a traditional litter box, and helps reduce odors.

Modkat sales started rolling in after the ICFF, primarily through Shopify and Amazon. To run their store and handle shipping and fulfillment, the owners say they use website tools and apps such as graphic design themes from outofthesandbox.com, ReferralCandy, Yotpo, and Shippo, and they used to use Shipwire, but recently started to fulfill internally for more flexibility, faster turnaround, and better pricing.

After the honeymoon phase of a greatly accepted product unveiling, they began dealing with QC surprises, logistics issues, money flow… basically the reality of entrepreneur headaches. “My advice, have at least one partner, know that everything is negotiable and don’t dwell on things, there’s always something just as important to do next,” says Williams.

Since their debut, several competitors have come out with copies, but ModKat continues to lead the way in both style and function. Their journey is a testament to the effectiveness of market research and properly handling self-employed highs and lows.