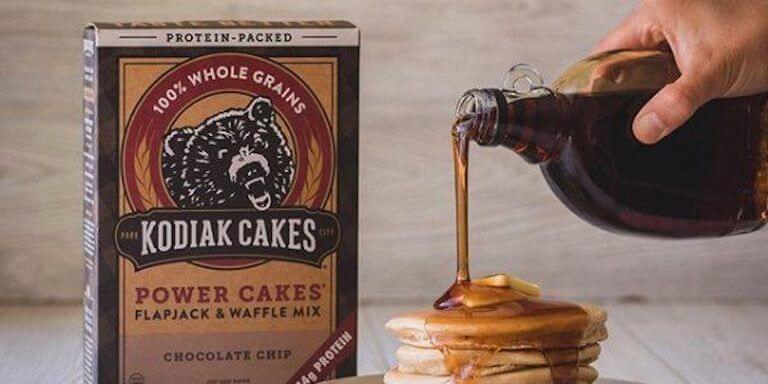 Kodiak Cakes puts their start up story on the backs of all of their products. Penny Clark had a recipe from her father for hearty whole grain pancakes that she made for her two boys, Jon and Joel. The summer of 1982, Penny loaded up a red wagon with homemade pancake mix and the boys went door to door selling brown paper bags of whole grain mix with the recipe taped onto it. That same recipe was used by Jon to launch Kodiak Cakes in 1995.

What the company doesn’t put on their boxes is the decades of stress and debt that accompanied @ Kodiak Cakes while it went through its growing pains. Jon Clark sold pancake mixes locally at first, to gift shops in ski towns in nearby Park City Utah. When John needed a more stable income for his family, he turned the business over to brother Joel, who was 23 and a student at the University of Utah.

Joel continued to hustle the family business. He juggled the business at night while going on to earn an MBA. He finally made Kodiak Cakes his full time job in 2004, and flipped cars and houses and tried to start two cookies businesses to make ends meet for his family. Joel’s father, Richard, stepped in to raise the company from $150,000 in revenue in 2004 to $800,000 in 2007.

But the company was still facing money issues and Clark was starting to meet with bankruptcy lawyers. Clark left the company in 2007 for a higher paying job, but when the new owners began raising prices and spreading the product line too thin, Clark cancelled the contract within the year and stepped back into role of the CEO. He couldn’t watch the family business go down at the hands of someone else.

The next year was no different, Joel Clark had to borrow $250,000 from his father to cover bills and finance a large order from Target. But things turned around when 23 year old Cameron Smith came on board in 2009. It was Smith’s idea to apply for Shark Tank, and Kodiak Cakes was accepted. Clark and Smith asked for $500,000 for 10% and received offers for that amount, but at 35% and 50% equity. Feeling undervalued, they left empty handed.

Nonetheless, Shark Tank worked it’s magic, just like it did for Scrub Daddy, Urbio, and many more. Kodiak Cakes’ sales rose from $3.6 million in 2013 to $6.7 million, getting a boost from the launch of its Power Cakes as well. The jump gave the company the momentum to focus on innovation and new products, like its frozen waffles and muffin mixes.

Just like Sir Kensington’s disrupted the condiments industry, Kodiak Cakes came for the unsuspecting pancakes. Kodiak is the number one pancake mix at Target with 54% category share, expanding the category by 20% and beating out Aunt Jemima. Now, they’re reinventing frozen waffles and beating out Eggo, thanks to their millennial appeal and health and fitness junkie sharings on social media.

Kodiak patented Protein Cakes in 2012, but didn’t launched until June 2014 when they could be sure protein really was trending. When they did launch, their 14 grams of protein mix took the company to the next level, making them one of the top three pancake mix brands. Oppositely their granola and oatmeal were launched prematurely and have not met great success, organic mixes have been discontinued, and because of this the white four was never launched.

Park City, Utah-based company Kodiak Cakes is growing 80% year on year and projected to hit over 1 million in revenue this year. Clark’s advice to entrepreneurs going through the same struggles he went through is to set six month goals to reach, and never give up no matter what hardships make you think your dream won’t work.